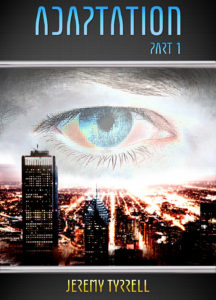 It could have been a straightforward action book. Nothing wrong with that. In fact, I quite like books with a hard nut character who goes in, guns blazing, gets the job done. But that wasn’t going to happen, not with Adaptation. As soon as I tapped out my first few pages, I hung my head and groaned. The story could not be simplistic.

Technology is ruthless whereas humanity is compassionate. Humanity creates technology, hence the conflict. I think this is the burning question underpinning a lot of science fiction. Where will it end? Will technology ultimately consume its creator? Can humanity resist incessant march of progress?

There was simply too much to explore, too much more than the ramifications of Project Adaptation meant to the world. And so the book that I had originally planned went out the window. I’m happy with that decision. I think if I left it at the brief examination that it was, I’d be annoyed with myself. As it is, I’m free to let the characters experience exactly what it means to fight for their humanity.

The cover art uses my eye. As Part 1 is about the Ottavio’s physical awakening and Ryan’s realisation of his potential, an open eye was fitting. What’s that? You want a YouTube trailer? OK:

Amazon – If this isn’t free here, it damn well should be. You can help by Making It Free!

One thought on “Adaptation – Part 1”

Portsmouth Avenue GhostFebruary 24, 2020
It is launched!

Keep up with Jez!